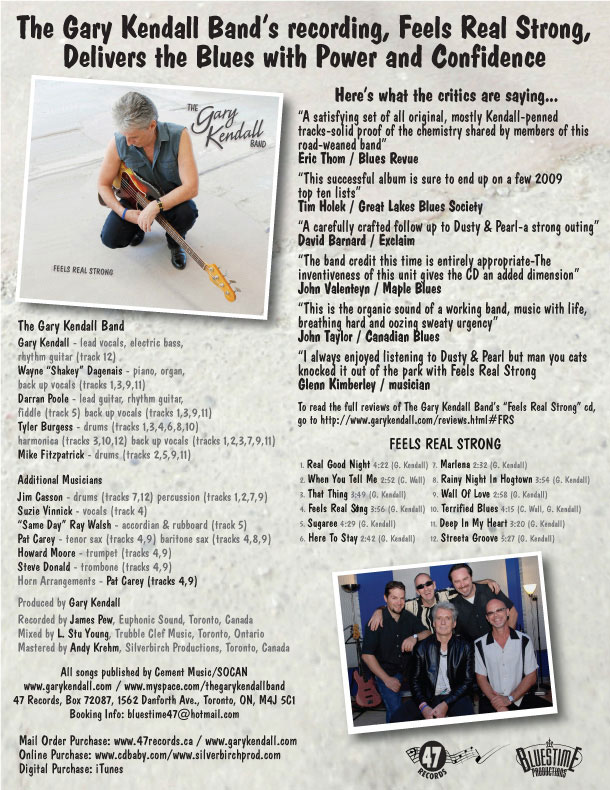 It all started in Thunder Bay, Ontario, the northern end of Highway 61. Elvis Presley on The Ed Sullivan show in 1956 and Muddy Waters, Willie Dixon and Sunnyland Slim on the CBC documentary “The Blues” in 1962.  Scanning the dial of an old radio, late at night in a basement bedroom, looking for exotic music from the south.  This is how Gary Kendall's journey into the world of the Blues began.  When other teenage boys his age went to weekend dances to meet girls, he stood off to the side watching the musicians on the bandstand.  At age sixteen, six months after acquiring his first pawn shop electric guitar; he jumped at the chance to join a band called The Countdowns and play bass.  None of the other young musicians wanted the bass players job, Gary just wanted to be in a band.  After making $20 at a Saturday night dance playing rock n roll, his future occupation was secured.

When the mid-sixties brought the British Invasion, it was The Rolling Stones that caught his ear and their music encouraged him to dig a little deeper and buy records by artists who were considered to be the first generation of the Blues.  He joined a band called The Shameful Minority with long time friend, guitarist David Smyth. The record collection now included Muddy Waters, Howlin' Wolf, Elmore James, Willie Dixon, B.B. King, Little Walter, The Paul Butterfield Blues Band and many more.

In 1968, Gary Kendall moved to Toronto, the city he now calls home.  By 1971, with The James Hartley Band, he was playing the legendary Grossman's Tavern and other blues bars in the Spadina & College neighborhood where he lived.  The Downchild Blues Band was at the top of the local scene and he quickly became friends with all the band members, brought together by a mutual respect for the music.

In 1974, playing in a basement bar, The Meet Market, beneath the legendary Colonial Tavern with his own band, Dollars, a friendship was struck with Muddy Waters guitarist, Bob Margolin.  A friendship that continues to this day. Bob arranged for him to sit in with Muddy and the band.  The privilege to play with one of his heroes is a strong and important memory that has stayed with him throughout his entire career. .  A few months later the basement bar brought in Sunnyland Slim, an artist first seen on television with Muddy Waters back in 1962.  He was thrilled when his band was asked to back up Sunnyland and Bonnie Bombshell for a week.

In late 1979 the opportunity to join The Downchild Blues Band became a reality.  The chance to play with old friends in one of his favorite bands seemed like a dream come true.  He stayed until 1983, recording four albums, “We Deliver”, “Road Fever”, "Blood Run Hot” and “But, I’m On The Guest List”.

From the mid-80`s to the early 90`s, Gary stayed off the road, holding down a house gig at Toronto’s, Black Swan Tavern with The Kendall Wall Band.  A group he formed with ex-Downchild drummer Cash Wall, harmonica ace Jeff Baker,guitarist Richard Smyth and later on Teddy Leonard, who became part of the multi-talented, award-winning band Fathead.  Their Saturday Afternoon Blues Matinee’s at the Swan became legendary.

In those days most touring acts came to Toronto for a week to play at Albert’s Hall and most of the artists came over to the Swan to do a guest spot on Saturday afternoon.  That gave KWB the opportunity to play with A. C. Reed, Pinetop Perkins, Eddy Clearwater, Tinsley Ellis, Little Willie Littlefield, Chubby Carrier, Bernard Allison, Eddie C. Campbell, Lefty Dizz, Eddie "Clean Head" Vinson, Eddie Shaw, Carey Bell, Fenton Robinson and many more.  This also led to KWB being used by venues like Albert’s Hall and The Bermuda Onion as a back up band for Luther “Guitar Junior” Johnson, Snooky Pryor, Big Jay McNealey, Honkin' Joe Houston, Phil Guy and Cash McCall.

In 1995, Gary Kendall returned to his position as bassist with Canadian music institution, The Downchild Blues Band.  Since then, they've released “Lucky 13”, “Come On In”, “Live at The Palais Royale”, “I Need A Hat” and the Juno Award winning “Can You Hear The Music”.

When not on the road with Downchild, he fills his insatiable need to play the blues by working under his own name as The Gary Kendall Band featuring Darran Poole on guitar, Shakey Dagenais on piano/organ and Tyler Burgess on drums.  GKB has released two recordings, Dusty & Pearl and Feels Real Strong along with digital singles, This Sacred Ground and Sumlin Around on his 47 Records label.

In 2012, Gary Kendall dug back into  the old and almost lost recordings of The Kendall Wall Band and released The Way We Was.  A documentary on the recording process and the history of the band is currently in the works.
Since 1999 he has held down the prestigious position as Musical Director/Band Leader at the annual Maple Blues Awards ceremony in Toronto.  A popular sideman, he continues to work with Robin Banks, Son Roberts, The Swingin Blackjacks, The Mighty Duck Blues Band, Harpdog Brown, Lazer Lloyd, Powder Blues, Bob Margolin and numerous freelance opportunities.

Whenever and wherever you find him, G.K. will be “layin’ down a solid groove and playin’ the blues”.

Recording a solo CD is something I've wanted to do for quite awhile, it's been in my head for a long time.  Early this year with the help and encouragement of Iridescent Music I was able to go into the studio and begin recording in mid-May.  I had nine of my own tunes, a few obscure blues covers and lots of ideas.  I've always had a good phone book and lots of friends in the biz so as the recording began to take it`s own life, the calls started going out.   By the time it wrapped in mid-August , thirty-three of  this country's  "Blues Elite" had joined me and made contributions.  Donnie Walsh and all the members of Downchild play on various tracks  Fathead`s, Al Lerman, Teddy Leonard and John Mays, along with horn players Chris Murphy, Larry Bodner, Chris Whiteley, Howie Moore, Steve Donald, Rich Howse are featured.  Singers, Suzie Vinnick, Judy Brown, John Dickie and Johnny Wright are heard through out.   Richard Bell  brought in his accordion and  keyboardists  Rod Philips and Martin Aucoin  added some organ.   My  good friend  and  bass confidant Terry  Wilkins  did a great job on acoustic bass on one track and Little Bobby and Pete Schmidt played some great harmonica and blues guitar.  The drummer's chair was occupied by my favourites, Mike Fitzpatrick, Jim Casson, Tyler Burgess and Tom Bona. Steve Grisbrook sat behind the board as engineer and did double duty adding some guitar and back up vocals. When not touring with Downchild I plan to promote "Dusty & Pearl" by performing with The Gary Kendall Band which features Darran Poole on guitar, Tyler Burgess on drums and Shakey Dagenais on piano.